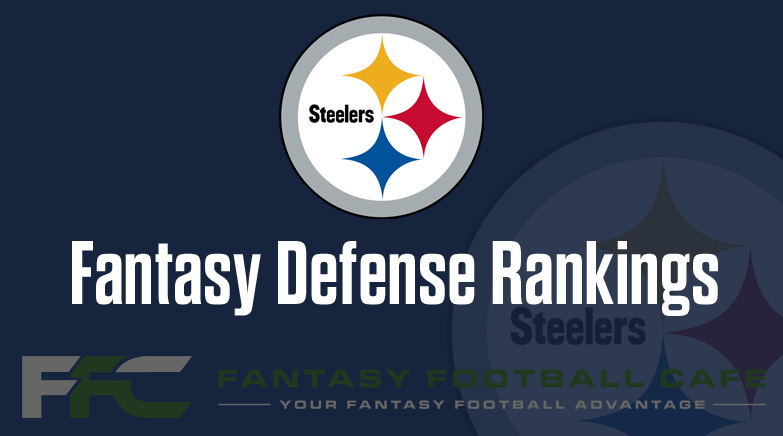 In the real world of professional football, defenses have a tendency to improve greatly the chances of winning a championship. However, gone are the days when this single attribute could pilot a squad to the ultimate NFL glory. In fantasy football, there are similarities.

Like the real deal, rarely can a defense make up for woeful deficiencies at the skill positions on your roster. Nevertheless, a weak link at your DST spot can steal fantasy points. When the final horn sounds at the end of the week’s last game, a poor defense could tank your team’s chance at a fantasy football victory.

So, without sticking your neck out in the early rounds of your fantasy draft, and missing out on a key skill player, how can you make sure you have at least a serviceable unit as your DST? Well, to begin with, know your team defense rankings. Here’s a look at a projected list of the top-10 ranked defenses heading into 2020.

#1 New England Patriots – When you finish as the number one overall defense in the NFL, and then get a little better, you’re going to get nods as the best bet for a fantasy football DST. That’s what the Patriots did. New England maintained a good defensive line, kept a key D-back, plus added depth on defense.

Now, we’re also going to look at another free agency factor affecting this reasoning. Gone from the Foxboro Farm is a legend named Brady. What does that mean for the Patriots’ defense?

#2 San Francisco 49ers – Not far below the Patriots are last year’s defending National Football Conference Champion 49ers. Some feel San Francisco will either play with a chip on their shoulder after getting burnt in the second half of Super Bowl LIV, or weaknesses will be revealed. San Francisco lost one key off their Super Bowl defense, DeForest Buckner.

Kerry Hyder comes over from the Cowboys to help fill that single void. The rest of a good defense is coming back. Look for San Francisco to play as well as they did last season. If the chip-on-the-shoulder mentality kicks in, they could be even better. If New England is gone, or you don’t believe in the Patriots DST, the 49ers would be a strong pick.

#3 Chicago Bears – The Bears are going to have a solid defense again. It’s partly precipitated by the type of offense they run, but not totally. They dropped off in turnover production last season, which stole some of their fantasy DST appeal. Chicago also only netted one DST touchdown off an interception.

The Bears recovered only nine fumbles, with those nine producing zero scores. Look for the Bears to get some return on averages. They are an opportune defense that usually does far better in these fantasy point producing DST categories. They should easily be a top-10 defense, with a high-ceiling if turnover points return.

The Steelers ranked fifth in total yards allowed, tying for the best with the Patriots and 49ers for yard per play. They let teams off the hook with more than 1,000 yards in defensive penalties, however. Make less untimely mental errors and the Steelers’ DST should be a solid fantasy unit again in 2020.

#5 Buffalo Bills – Buffalo has one of the smallest variables from best to worst projections. Very few envision Buffalo not being at worst a top-10 DST unit. Some target them a step behind the Patriots. One factor may be that they no longer have to stop Tom Brady twice every season.

Buffalo picked off 14 passes and scooped up nine fumbles, but didn’t generate a defensive TD on any of those takeaways. They were one of only three teams to surrender less than 300 yards per game, plus ranked second in yards per play at 4.8. Their 44 sacks of opposing quarterbacks ranked 12th. Buffalo is another ball-control team with a DST worth mid-round consideration.

#6 Minnesota Vikings – The Vikings defended the third most passes in the league last season. That led to a third place rank in interceptions. They ended up with 48 quarterback sacks to rank 5th in that category. A problem was that they had a tendency to give up yards between the 20s. Some feel they lost a couple of cogs in their secondary.

However, all indications point to Minnesota adding immediate talent on the defensive side of the ball in the 2020 draft. They have some tough dates on the first 10 weeks of their schedule, but they also have games against appealing matchups. The Vikings may drift past the mid-rounds, but they are a good DST that shouldn’t hurt you from week-to-week.

#7 Los Angeles Chargers – There are a number of draft projections that push the Chargers’ DST into the second ten. However, they scored a couple of winners in free agency that make this a potential fantasy sleeper. They were the sixth stingiest DST for total yards, but only picked off 11 passes. Eli Apple and Chris Harris should help improve that number.

They will also stick former Viking DT Linval Joseph in the middle to help stuff the run. Los Angeles added much needed depth at linebacker as well. There is going to be a slight change of mindset in the offensive scheme that could use to more ball-control focus. The Chargers must improve on their 30 sack total in 2019, but they could be a nice surprise at fantasy DST.

# 8 Baltimore Ravens – After Buffalo, Baltimore shows the smallest margin of difference between best and worst projections. There are a number of charts pushing the Ravens back to the top of pro football’s best defenses. Like the Chargers, more than last year’s 37 sack total will help fantasy performance.

Baltimore finished 4th in total yards allowed, plus they snagged 13 interceptions and turned those into a pair of TDs. The Ravens led the NFL in points off fumbles, scoring four TDs. This is an opportunistic defense that feasts of scoring points. They should be good again in 2020, but expecting six defensive TDs may too much to ask. Good second-half of the draft DST choice.

#9 Los Angeles Rams – The 2019 Rams defense finished out of the top-10 in yards allowed, but roped in the fourth highest sack total. LA only picked off 13 passes, but put four defensive touchdowns on the scoreboard. The Rams also gave up a lot of untimely points in 2019, an improvement in 2020 that should help their ranking.

They replaced a free agent linebacker with a former ninth overall pick. They kept one of their defensive tackles, plus added some depth. After getting a running back with their first draft pick, most think Los Angeles will start adding talent on defense. They might even look at a top-tier edge rusher first, if one is available. The Rams are on the bubble, but could easily be a strong DST selection.

#10 Seattle Seahawks – While this isn’t quite the Legion of Doom, the Seahawks are raising eyebrows with the potential solidness of their defense heading into 2020. They brought back a former first-round pick in Bruce Irvin on the line. They swapped a 5th round pick for the second-best rated cornerback in the league last season. The Seahawks finished 5th in interceptions and tied for second in fumble recoveries.

To realize our top-10 projection, they will have to find more sacks. They finished next to last in that category ahead of only the Miami Dolphins. Jadeveon Clowney should feel more comfortable this season, helping that problem. Seattle may not be top-five DST, but they could spell doom for your fantasy opponents as yours.

Putting a decent defense on your fantasy football roster is important. Sure, you need a solid quarterback and points-producing skill players, but a good DST can add points every week. Each of these defenses has the potential to net double-digit fantasy points on any given week, and should be worthy of their top-10 rank. Of course, more will be revealed next fall.